Verdun, a city with a rich history. Existed in the time of the Roman Empire, resisted Attila de Hun, fortified by Vauban and Napoleon.

This ancient city has been used to demonstrate the cruelty only humans can do. The German Chief of Staff, Erich von Falkenhayn, believed that although a breakthrough might no longer be possible, nonetheless the French could be defeated if they suffered enough casualties. He therefore planned to attack a position from which the French could not retreat, for both strategic reasons and reasons of national pride, and so impose a ruinous battle of attrition on the French armies. The town of Verdun-sur-Meuse was chosen for this "bleeding white" of the French: the town, surrounded by a ring of forts, was an important stronghold that projected into the German lines and guarded the direct route to Paris.

The battle started on 21 February 1916 and lasted until 19 December 1916. It resulted in more than a quarter of a million deaths and about half a million wounded. It was the longest battle of World War I, and the second bloodiest after the Battle of the Somme (1916).

Rather than a traditional military victory, Verdun was planned as a vehicle for destroying the French army. Falkenhayn wrote to the Kaiser:

The answer of the France was as to be expected

The monument above (the memorial on Mort-Home, a hill near Verdun) has the encryption of the end-result "They did not pass" (France:"Ils n'ont pas passé ") is one of the most famous killing field.
The Battle of Verdun — also known as the "Mincing Machine of Verdun" or "Meuse Mill" — has become a symbol of French determination to hold the ground and then roll back the enemy at any human cost.

At the opening of the Verdun offensive in February 1916, the typical French soldier was clad in the horizon blue tunic and trousers, with an outer wrapping of the Modéle (Mle) 1914/15 greatcoat and head protection courtesy of the Mle 1915 Adrian pattern steel helmet. His personal world was carried in the Mle 1893/1914 knapsack, the contents of which revealed every soldier’s priority at the frontline. [2]

The primary weapon for the soldiers of all sides was the bolt-action rifle. For the French this meant either the 8mm Mle 1886 Lebel or one of several types of Berthier rifle, named after the man who had headed the design committee behind the rifle, André Berthier. Their machinegun was the Hotchkiss Gun The Germans had a single model of the bolt-action rifle to guide them through the war – the 7.92mm M1898 (Gewehr 98) and their trust in a far superior brand of machine-gun, the 7.92mm Maxim MG08.

While the French would concentrate the weight of its combat soldiery (about two-thirds of each regiment) in the forward trench, the Germans opted for a lightly manned frontline, the reasoning being that this trench line would be the most heavily bombarded in an attack. At Verdun, in fact, German frontline troops were often told to abandon their trench under bombardment, hiding out in deep underground dugouts or in nearby shellholes. The weight of the German troop numbers was therefore kept much further back in second and third lines of trenches, creating an ‘elastic defence’ that could deliver a powerful counter-attack just at the point the enemy attack was running out of steam. This tactic was a key reason why, time and time again, we see Allied offensives make promising initial gains that were subsequently lost a few days into the battle. [2]

The forts around Verdun were largely emasculated during the immediate pre-war years, and in the early years of the conflict. Douaumont was no exception, and in 1915 its main armament was stripped down to just one 155mm and one 75mm gun – these were only left because they were too difficult to remove. Its garrison similarly declined to less than sixty men. Here was a lion without its teeth. [2]

The ability of German siege guns to smash static fortress targets had already been proven in the opening phase of the war, at places such as Anvers, Liége, Mauberge and Namur. 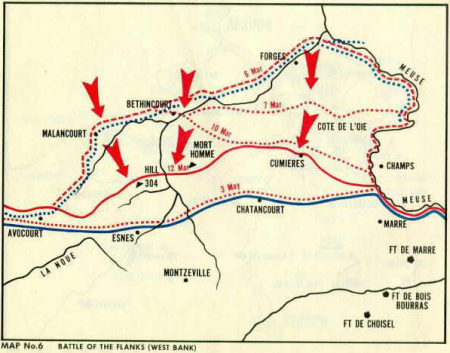 Battle of the Flanks

While the French remained largely in denial, the Germans were obviously using their time for far more industrious purposes. Operation Gericht was going to be a huge action, involving three corps of the German Fifth Army for the initial push. These corps were VII, XVIII and III, the first two facing the unfortunate 72nd Division while III Corps would attack the 51st Division. To the west of the Meuse was VI Corps, while V and XV Corps were positioned to the east in reserve. The gathering of men and materiel was enormous – 140,000 troops for the attack, plus 2.7 million artillery shells. (Other materiel brought up to the frontline included a million sandbags.) To facilitate this movement, no fewer than ten train lines were constructed, plus numerous associated stations, and thousands of vehicles and horse-drawn wagons were applied to transferring the men, weaponry and equipment from the railheads to the frontline.

top For pictures of Verdun see the author's Flickr webpages.

See for more links WW1_Links on this site.