Every victory comes at a price. Here we look at the staggering cost of human life in five of history’s fiercest confrontations where the sheer number of warrior-dead defies imagination.

This list of bloodiest battles is based on several sources, such as Wikipedia List of Battles, Necro Metrics Battles and the individual website on the topics. The given data is not accurate, simply because the sources are not unanimous about the figures. In a war there at least 2 sides and they are not quite willing to provide this kind of data

The Battle of Gettysburg was fought July 1–3, 1863, in and around the town of Gettysburg, Pennsylvania, by Union and Confederate forces during the American Civil War. The battle involved the largest number of casualties of the entire war and is often described as the war's turning point. It is currently a widely held view that Gettysburg was a decisive victory for the Union, but the term is considered imprecise.

The Battle of Cannae is a major battle of the Second Punic War that took place on 2 August 216 BC in Apulia, in southeast Italy. The army of Carthage, under Hannibal, decisively defeated a larger army of the Roman Republic under the consuls Lucius Aemilius Paullus and Gaius Terentius Varro. It is regarded both as one of the greatest tactical feats in military history and as one of the worst defeats in Roman history.

1st Battle of the Marne[edit]

The Battle of the Marne (French: Première bataille de la Marne, also known as the Miracle of the Marne) was a First World War battle fought from 5–12 September 1914. It resulted in an Allied victory against the German Army (Chief of Staff Helmuth von Moltke the Younger). The battle was the culmination of the German advance into France and pursuit of the Allied armies which followed the Battle of the Frontiers in August and had reached the eastern outskirts of Paris. A counter-attack by six French field armies and the British Expeditionary Force (BEF) along the Marne River, forced the Imperial German Army to retreat north-west, leading to the Battle of the Aisne and the "Race to the Sea". The Battle of the Marne was a victory for the Allies and set the stage for four years of trench warfare on the Western Front.

1st Day of the Somme[edit] 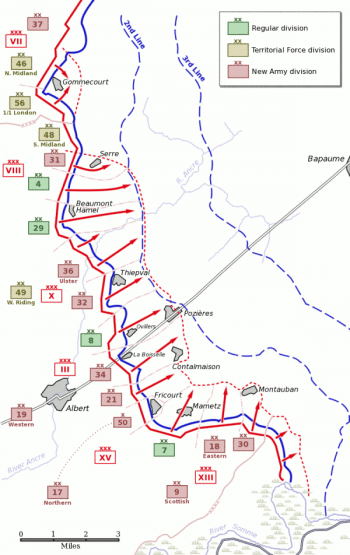 The first day on the Somme (1 July 1916) began 141 days of the Battle of the Somme and the opening day of the Battle of Albert. The attack was made by five divisions of the French Sixth Army either side of the Somme, eleven British divisions of the Fourth Army north of the Somme to Serre and two divisions of the Third Army opposite Gommecourt, against the German Second Army of General Fritz von Below. The German defence south of the Albert–Bapaume road mostly collapsed and the French had "complete success" on both banks of the Somme, as did the British from the army boundary at Maricourt to the Albert–Bapaume road. On the south bank the German defence was made incapable of resisting another attack and a substantial retreat began; on the north bank the abandonment of Fricourt was ordered. The defenders on the commanding ground north of the road inflicted a huge defeat on the British infantry, who had an unprecedented number of casualties. Several truces were negotiated, to recover wounded from no man's land north of the road.

The Battle of the Somme (French: Bataille de la Somme, German: Schlacht an der Somme), also known as the Somme Offensive, was a battle of the First World War fought by the armies of the British and French empires against the German Empire. It took place between 1 July and 18 November 1916 on both sides of the River Somme in France.

The Normandy landings (codenamed Operation Neptune) were the landing operations on Tuesday, 6 June 1944 (termed D-Day) of the Allied invasion of Normandy in Operation Overlord during World War II. The largest seaborne invasion in history, the operation began the liberation of German-occupied northwestern Europe from Nazi control, and contributed to the Allied victory on the Western Front. 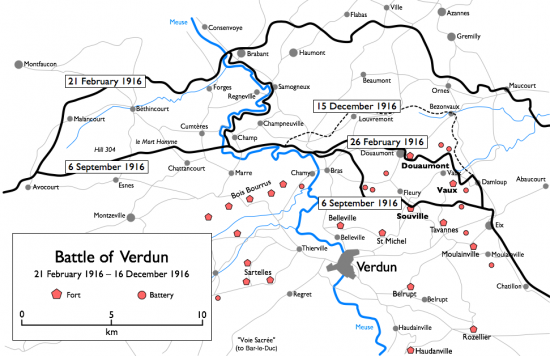 The Battle of Verdun (Bataille de Verdun), fought from 21 February – 18 December 1916, was one of the largest battles of the First World War on the Western Front between the German and French armies. The battle took place on the hills north of Verdun-sur-Meuse in north-eastern France.

The Battle of Leipzig or Battle of the Nations (Russian: Битва народов, Bitva narodov; German: Völkerschlacht bei Leipzig; French: Bataille des Nations) was fought 16–19 October 1813, at Leipzig, in Saxony. The coalition armies of Russia, Prussia, Austria, and Sweden, led by Tsar Alexander I of Russia and Karl Philipp, Prince of Schwarzenberg, decisively defeated the French army of Napoleon I, Emperor of the French. Napoleon's army also contained Polish and Italian troops, as well as Germans from the Confederation of the Rhine.
The battle was the culmination of the 1813 German campaign and involved nearly 600,000 soldiers, making it the largest battle in Europe prior to World War I.

The Battle of Stalingrad (23 August 1942 – 2 February 1943) was a major battle on the Eastern Front of World War II in which Nazi Germany and its allies fought the Soviet Union for control of the city of Stalingrad (now Volgograd) in Southern Russia, on the eastern boundary of Europe.