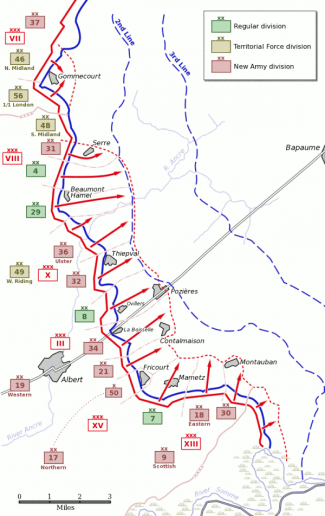 Centenary of the Battle of the Somme[edit]

The BBC and France 2 are showing this event in full. Other broadcasters will also be attending for news coverage.

The battle of the Somme started with a large bombardment on June 24, 1916 during until July 1, 1916. A total of 10 mines were detonated along the British front that Saturday morning, nine of them at 07:28 hours, just two minutes before the bombardment stopped and the men went over the top. The large bomb under the redoubt Meidoorn (near Beaumont Hamel and also known as the Hawthorn ridge mine) detonated at 0720 allowing an easier capturing by the 29th division. For 10 minutes no shot was fired, giving the German army the change to regroup in the trenches in the surroundings of Thiepval. The infantry assault started on July 1, 1916 at 0730 and ended in the greatest massacre of the British empire until today. The most costly one day massacre is still the Battle of Cannae (60-70.000 Romans killed or captured).

For this prodigious effort and loss, the reward was the capture of the enemy front line system around Montauban and Mametz. Tiny lodgements were gained elsewhere but could not be held. The attacks on the front of La Boisselle, Ovillers, Thiepval, Beaumont Hamel, Serre and Gommecourt all failed. Click on the map on the left for a larger readable map.

The Somme is also famous for the first use tanks (all available at that moment: 49 pieces) on the battlefield on 15 September 1916 (Battle of Flers Courcelette).

The battle lasted for 141 days and ended on 17 november 1916. When the offensive was halted in November, more than 1,000,000 Commonwealth, French and German soldiers had been wounded, captured, or killed.

The 36th (Ulster) Division held a position which straddled the Ancre River (North of Thiepval and South of Beamont Hamel). Because their compatriots could not advance towards Beaucourt, the German machine gun crews were able to turn their attention to the main body of the 36th Division across the valley near Schwaben Redoubt.
The casualties suffered by the 36th Division on the 1st of July totaled over 5,000.
German strong points 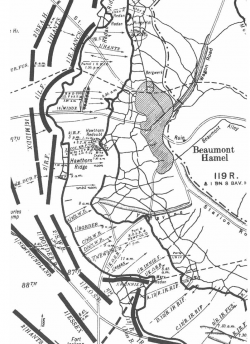 Beaumont Hamel is a small Picardy village. In the great war the Hawthorn ridge and the Hawthorn redoubt has been located in this area. The explosion of the Hawthorn mine on 1 July 1916 on 07:20 was the signal to attack. The mine took seven months to lay, being 75ft deep and 1,000ft long. It was prepared with a 40,600lb ammonal charge by 252nd Tunnelling Company. The resultant crater was 40ft deep and 300ft wide.

The mine explosion has been filmed by Geoffrey Malins, see First World War Hawthorn Mine for photo's and films. 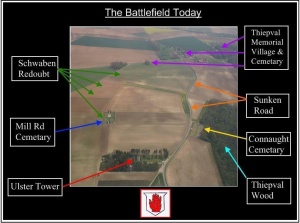 No afford has been made to create a supprise attack. Even the time of the infantry attack (0730) is strange. Normaly the attack starts in darkness and not in full sunlight.
From this date attacks try to have a supprise effect and to start in dawn.

The effect of the bombardment on the barbed wire was negligible. A lot of artillery bombs did not explode and also the wrong type of artillery has been used resulting in a still existing barbed wire structure. 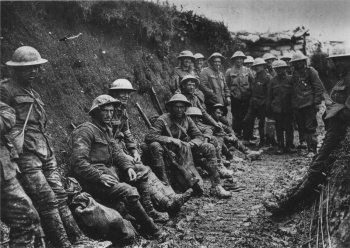 As a consequence of the lack of surprise generated by the advance bombardment, and the lack of success in cutting the German barbed wire and in damaging their underground bunkers, the BEF made strikingly little progress on 1 July or in the days and weeks that followed.
After the disaster of the first day on the Somme, British efforts were concentrated south of the Albert-Bapaume road and the Hawthorn Ridge sector was not subjected to further major attacks until the final push of the battle on 13 November with the opening of the Battle of the Ancre. For this attack another mine was laid beneath Hawthorn Ridge, this time containing 30,000 lb (13 tons) of explosives. On this occasion, superior British planning resulted in a successful assault and Hawthorn Ridge as well as Beaumont Hamel were finally captured.

Despite the slow but progressive British advance, poor weather – snow – brought a halt to the Somme offensive on 18 November. During the attack the British and French had gained 12 kilometres of ground, the taking of which resulted in 420,000 estimated British casualties, including many of the volunteer ‘pal’s’ battalions, plus a further 200,000 French casualties. German casualties were estimated to run at around 500,000. Making a incredible total of 1,120,000 casualties.