This article is fully based on Gamma's Design Patterns, Elements of Reusable Object-Oriented Software [1].

Define a one-to-many dependency between objects so that when one object changes state, all its dependents are notified and updated automatically.

A common side-effect of partitioning a system into a collection of cooperating classes is the need to maintain consistency between related objects. You don't want to achieve consistency by making the classes tightly coupled, because that reduces their reusability.

For example, many graphical user interface toolkits separate the presentational aspects of the user interface from the underlying application data. Classes defining application data and presentations can be reused independently. They can work together, too. Both a spreadsheet object and bar chart object can depict information in the same application data object using different presentations. The spreadsheet and the bar chart don't know about each other, thereby letting you reuse only the one you need. But they behave as though they do. When the user changes the information in the spreadsheet, the bar chart reflects the changes immediately, and vice versa. 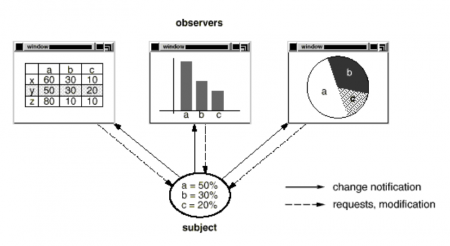 This behavior implies that the spreadsheet and bar chart are dependent on the data object and therefore should be notified of any change in its state. And there's no reason to limit the number of dependent objects to two; there may be any number of different user interfaces to the same data.

The Observer pattern describes how to establish these relationships. The key objects in this pattern are subject and observer. A subject may have any number of dependent observers. All observers are notified whenever the subject undergoes a change in state. In response, each observer will query the subject to synchronize its state with the subject's state.

This kind of interaction is also known as publish-subscribe. The subject is the publisher of notifications. It sends out these notifications without having to know who its observers are. Any number of observers can subscribe to receive notifications.

Use the Observer pattern in any of the following situations:

The first and perhaps best-known example of the Observer pattern appears in Smalltalk Model/View/Controller (MVC), the user interface framework in the Smalltalk environment.