Modelling tools have their own interpretation of how diagrams, icons are used. This webpage tries to give some clues on how this implementation are made.

To specify the visibility of a class member (i.e., any attribute or method), these notations must be placed before the member's name: 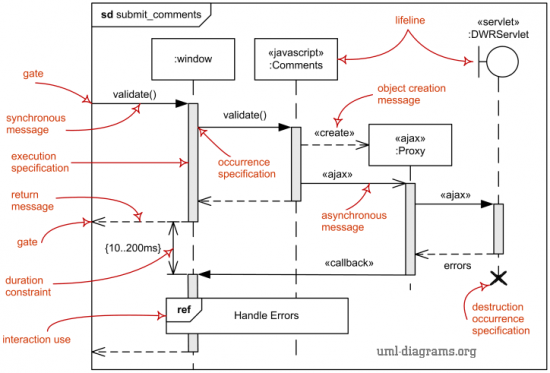 UML Sequence Diagram [1] is the most common kind of interaction diagram, which focuses on the message interchange between a number of lifelines.
Sequence diagram describes an interaction by focusing on the sequence of messages that are exchanged, along with their corresponding occurrence specifications on the lifelines.
The following nodes and edges are typically drawn in a UML sequence diagram: lifeline, execution specification, message, combined fragment, interaction use, state invariant, continuation, destruction occurrence. Major elements of the sequence diagram are shown on the picture on the right.

There is no general notation for an interaction fragment. Its subclasses define their own notation.